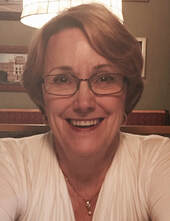 Holly began playing the piano at age 4 and the organ at age 13. She attended the University of Oklahoma for two years studying under Mildred Andrews before she left to be an Army officer's wife for 24 years. After 13 moves, which allowed her to be organist at churches in Pennsylvania, New Mexico, and Germany, she and her husband settled in Little Rock, where she remained following his death in 2012. Holly is director of the "Wild Bells" handbell choir (previously called the "Adult Handbell Choir" but she says "Wild Bells" really suits them better) and a substitute organist. On Valentine's Day 2014, she married her high school sweetheart, Larry Bradfield, and now they are enjoying retired life, traveling as much as possible, much to the chagrin of their calico cat, Bella.