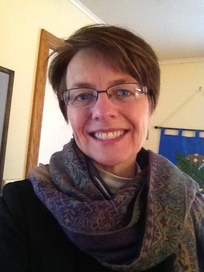 Although I married an Arkansan and have lived in Conway for over 30 years,  I was born and raised in England (NOT England, Arkansas!) and still consider myself "English." But can you believe that growing up in England, I never once heard of "English handbells"? Really – I first heard handbells in the First United Methodist Church, Conway, where I subsequently became Director of Music and Worship, a position I’ve had for 24 years.

I quickly learned to love my bell choirs. Beginning with one choir, I now direct three children’s/youth bell choirs, and two adult choirs. I enjoy each group with its own unique joys and challenges. I love my "regular" choirs too, of course – but I maintain there is something special about the bonds between bell ringers.

My husband, J.D., has faithfully and tirelessly supported the craziness which is the life of a church musician. He dressed our young children (sort of) by himself on Sunday mornings, hid and hunted eggs by himself with them on Easter (trying valiantly to capture everything on camera so I could enjoy it later), has carried more bell tables up and down stairs than he has had hot dinners, brought dinner to my office between rehearsals and sat on the couch to eat with me … you get the picture. He’s done this job right alongside me!

Both of our children, Sarah and Zach, were music majors and played in bell choirs all the way up to and through college. While I'm sure that two music majors will be supporting me in my retirement, I’m happy that they are now working (in the music field) and doing something they love. I pray that music brings you that same joy and fulfillment.